Buggin Out Termite and Pest Control are professionals when it comes to identifying the problem, remove the bees and removing beehives in Countryside, Fl. Bee Removal is what we do. With rising concerns of the Africanized Honeybee (killer bee) more people are now looking to control their bee problems rather than avoiding them. Unlike other pest control companies who only kill the bees but don’t fully solve the problem; We find the hive, remove the bees, remove the hive, and prevent future infestations of the area. That is true bee control!

Unlike the European honeybee, the Africanized Honey Bee is easily aggravated. The killer bee has been on a journey from South America to North America since 1957. The first reported case in the USA was in 1990, by 1994 they reached California, and moving at a rate of 200 miles per year you would think they would have overwhelmed the continent by now. Their expansion rate has been drastically reduced thanks to professional bee control companies who have crews specializing in bee control.

Most bees found in Florida are earnest, hardworking types who much prefer gathering nectar to attacking the unknowing homeowner or their family.

Having their colony life interrupted or their flight path blocked by an unsuspecting human may frighten or irritate them into stinging whoever is closest.

European bees for the most part are not a threat unless aggravated. Aggravation will occur if they feel their hive is in danger. Swatting at flying bees is not recommended since all you will accomplish is to aggravate them. Unlike the European honeybee, the Africanized bee does not need an excuse to attack. They protect their hive and queen at a larger radius. Again, unlike the European honey bee, the Africanized bee may pursue intruders for up to a mile and remain aggravated for up to 24 hours.

The most common stinging bee in Florida is the honeybee, introduced into this country from Europe in the 17th century. Its stinger, which resembles a hypodermic needle with barbs, is used to inject a mixture of alkali venom and acid into the skin. The alkali venom contains several kinds of proteins and enzymes which are believed to cause allergic reactions of varying degrees in humans. Sting reactions, which may increase with succeeding stings, include:

♦  A choking sensation or difficulty in breathing.

♦  A skin rash similar to hives (human hives, not beehives).

♦  A dry cough, sneezing or asthma.

♦  A rapid pulse and a drop in blood pressure. 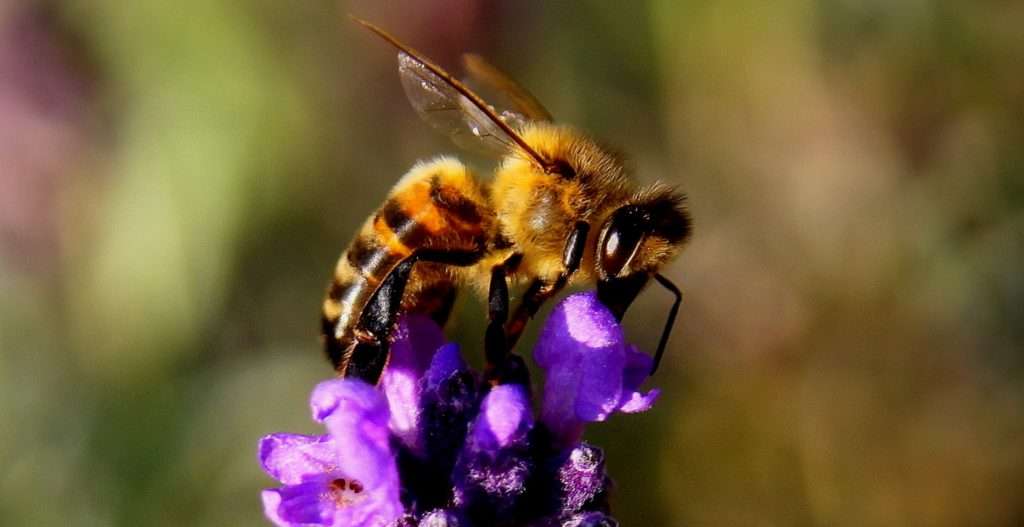 More severe reactions may include cramps, diarrhea, vomiting, shock, or loss of consciousness. Symptoms usually appear within a few minutes after a sting but could be delayed up to 24 hours. Stings near the eyes, nose and throat are the most dangerous. For severe reactions, medical assistance should be sought immediately.

When stung by a bee, the stinger should be removed as quickly as possible, but removing it improperly will make the sting worse. The proper way is to scrape the stinger out with a clean fingernail or knife. Pulling or squeezing the stinger will only pump more venom into the wound, as the bee parts containing the venom are left attached to the stinger after the bee tears itself free.

The sting area should be cleaned with soap and water, or with an antiseptic. For people known to have severe reactions who are stung on the arms or legs, a tourniquet may be applied between the wound and the heart to prevent the rapid spread of venom. The tourniquet should be released every three to five minutes until medical help is available.

In the past few years, the Africanized Honeybee (AHB) population has grown and will continue to grow in Florida due to its numerous pathways into the state and the lack of effective eradication products or techniques. Because of crossbreeding in South America, they are now known as Brazilian honeybees.

Killer bees are dangerous. They will attack anything moving within 100 yards of their nest without provocation and will chase a running target much farther than less excitable varieties of bees.

In appearance, killer bees resemble any other honeybee. It’s their attitude that sets them apart. They are now a problem in Florida.

Bees are affected by the type of clothing people wear. for some reason, rough and dark clothing of wool or leather irritates them, which is why professional beekeepers wear light colored, smooth textured clothes when tending their hives. Some perfumes also aggravate bees, which will attack a moving target faster than they will an immobile one. Running or swatting at them only increases the chances of a sting.

So, when a bee draws near, try to relax. It will probably lose interest in you once it finds out you are not a flowering Gardenia — or an enemy.

It is important to note, managed honeybee colonies (bee boxes often seen in agricultural fields) are an important part of Florida agriculture because they pollinate foods we eat including fruits, vegetables and nuts.